3350
Little is known of the insect-like Cethon race to which Talo'thrix belongs. An immense and terrifying phalanx, the Cethon do not conquer so much as they devour. Able to eradicate the population of entire world in mere days, the Cethon spread like a disease across the planets of the Outer Arm, consuming everything in their path, as though driven by some unknown impetus. It is believed the Cethon share a hive mind, but it is unclear if this is part of their biological makeup or the result of their mysterious cybernetic enhancements -- the origins of which have yet to be determined.

From what little is known of him, Talo'thrix seems to be a kind of scout for the Cethon; a harbinger of destruction. Alone he scours the cosmos, seeking out new worlds upon which the Cethon may feed. Many have attempted to exterminate Talo'thrix, in the hopes that, by killing him, they might prevent the destruction of their world. None have been successful.

While in search of another world for his hive to raveage, Talo'thrix discovered a strange portal, emitting an enticing blue glow. As though drawn to it, Talo'thrix was pulled through the portal and into the Gliese system.

Though Talo'thrix is far from the Outer Arm, his connection with the Cethon hive-mind cannot be broken, and this new corner of the galaxy is rife with worlds ready to be devoured. 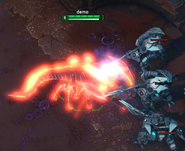 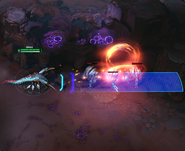 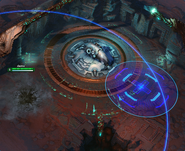 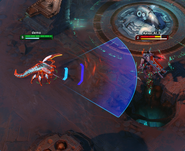