They are called Technomancers. Those who use blur the lines between science and mysticism using strange and powerful technology. Isolated in their crypts and chambers, those in the Brotherhood toil with powers they themselves do not fully understand, often with deadly results. But even their collective crimes against nature pale in comparison to Slith and his unquenchable thirst for this forbidden knowledge.

There are none alive who know Slith’s true origin, nor how he came to join the Technomancer Brotherhood, except Slith himself. Some say that he was once a man and that his malformed shape was self-inflicted. Some say he is an experiment that escaped and took over his captor’s trade. Still others say he was an explorer who traveled to the edge of the universe and was transformed into a demon by what he encountered there. Ask him yourself and he will tell you they are all true.

Despite his mysterious origin, or perhaps because of it, Slith earned a reputation as one of the most powerful and dangerous Technomancers in the Brotherhood. Not content to simply dabble on the edges of the arcane, Slith began to delve into the properties of dark matter and its link to mysticism and conjuration. Slowly, Slith began to discover ways to harness dark matter and bend it to his will.

Sadistic and remorseless, Slith began experimenting on living subjects. Day and night he toiled, honing his skills and testing the effects of his new found powers on helpless captured souls. He soon found himself able to generate powerful bolts of energy, alter the properties of matter, and he even theorized that he might be able to conquer death itself. The screams that echoed from his chamber seemed never-ending.

Finally, even his fellow Technomancers had decided Slith had gone too far. But when Thomal, the head of the Technomancer order, came to Slith demanding he cease his experiments, Slith simply turned Thomal into another of his test subjects. The Order never bothered him again. Ever hungry for more knowledge, when Slith learned that a strange device had opened a mysterious portal in a backwater system known as Gliese, he immediately set a course to the system to discover what secrets the artifact may hold. 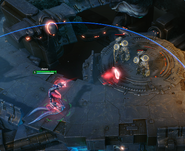 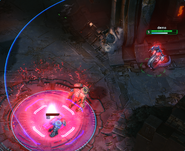 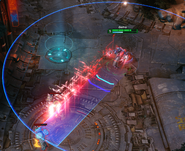 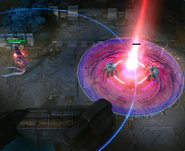