In the world of intergalactic bounty hunting, having scruples will cost you jobs, and Skrime doesn’t like losing jobs.

Born to the peaceful and prosperous Creyalian race, Skrime was the black sheep of his family, spending his time drinking, gambling and stealing. When Skrime killed a casino owner in a fight over gambling debts, he was sentenced to death. However, his parents used their connections in the Creyalian government to commute his sentence to exile. Skrime was sent to the gaseous moon of Repax -- a practically uninhabitable wasteland.

Though Skrime’s life on the unforgiving moon was a struggle at first, he soon discovered that the largely unvisited rock was an ideal place for those on the run, especially those with bounties on their heads. Not one to pass up an opportunity, Skrime captured his first bounty with nothing but his bare hands. He then used the criminal’s own ship to leave Repax and claim the reward money. For several years, Skrime repeated his winning strategy. He would gain the trust of his targets before delivering them to their home planets for a tidy sum of cash. In cases where the criminal was wanted dead or alive, Skrime always chose “dead.” He found it was just easier that way. He didn't have to waste any money feeding them on the trip to claim the bounty. It didn’t take long before Skrime’s pockets were full of cash and his moon became junk yard full of scrapped ships and equipment. Using all this scrapped technology, Skrime built himself an exosuit capable of adjusting to any planet’s atmosphere as well as an assortment of deadly state-of-the-art weaponry.

Skrime soon developed a reputation as the most ruthless bounty hunter in the galaxy. Once you are on his list, he will follow you to from one end of the galaxy to the other, using any means necessary to claim your bounty, dead or alive, depending on what the client has requested.

Despite all of his riches, Skrime is very frugal and would rather use the scrap metal from his junkyard to build things than buy them. He still uses his junkyard on Repax as a front for his bounty hunting business as well as an excellent place to dump the bodies of those that get in his way. 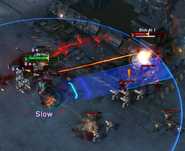 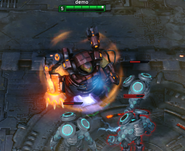 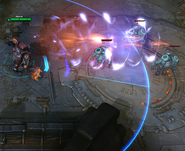 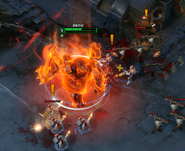