2250
The Veskar were once a proud and ancient race of reptilian warriors. Molded by centuries of bloodshed and strife, the Veskar spurned defeat time and time again until there were none left who dared challenge their empire. the peace was not to last, however. With a lock of threats from without unrest and turmoil took hold from within and the Veskar soon found themselves entangled in one civil war after another.

Then, the Faceless came.

Having kept close watch on the Veskar for many years, the Faceless took advantage of the internal turmoil plaguing their empire and chose to invade. Reptus, though still in training, was eager to show off his prowess in battle. He volunteered to fight on the front lines, meeting the Faceless invasion head on. Many a Faceless warrior was cut down by Reptus' spear and his ferocity in battle served to rally his fellow soldiers. Divided as they were, the Veskar nevertheless proved to be a formidable foe for the invaders. Twice, the Faceless laid siege to the Veskar homeworld, and twice, they were driven back, defeated.

Still the Faceless refused to relent, and when their massive armada once again darkened the skies of the Veskar homeworld, it would prove to be the third and final time. The already fractured Veskar Empire was simply too weak to mount an effective defense against the Faceless legions. Most of the Veskar were killed in the attack. Those that survived were enslaved. Even amongst the Faceless, Reptus was known for his considerable skill in battle and so was chosen to fight in the Arena as entertainment for the hedonistic masses on the Faceless homeworld.

Reptus spent years fighting in battle after battle in the Arena, dueling with hundreds of other slaves ensnared by the Faceless from across the galaxy. The scars of his victories collected on his tough green hide, but the praise and adoration of the masses did little to wash away the shame of being a captive and slave.

Reptus' day of reckoning began as any other. Only this time, as the gates to the Arena opened and the crows roared, Reptus found himself face to face with two other Veskar warriors, sent to die in the Arena as punishment for having disobeyed their masters. Refusing to kill his own kind, Reptus convinced the two other Veskar to overpower the guards and escape. Fighting their way out of the Arena and into the gladiator holding cells, they released all the slave gladiators, sparking a massive riot.

Reptus and his fellow Veskar used the ensuing chaos to escape the Arena, eventually fighting their way on to a small shuttle and off the planet. With the horrors of the Faceless Arena behind them, the three warriors made a pact to each scour different corners of the universe in search of other Veskar survivors. 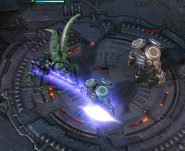 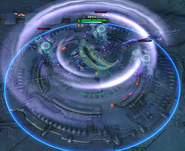 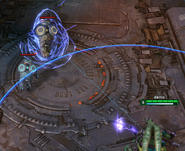 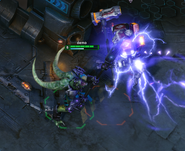