Ages ago, the galaxy was terrorized by a ruthless, sadistic race knows as The Harvesters. Using swarms of cybernetic creations, The Harvesters conquered entire star systems, transforming each race that fell under their rule into grotesque, cyborg slave-soldiers.

Ages ago, the galaxy was terrorized by a ruthless, sadistic race known as the Harvesters. Using swarms of cybernetic creations, The Harvesters conquered entire star systems, transforming each race that fell under their rule into grotesque, cyborg slave-soldiers.

Eos is one of the last remnants of this long forgotten, ancient race. Programmed to seek out and neutralize the biggest threats to their masters, Eos and his counterparts were once counted as the greatest of weapons in Harvester's legions. Over the course of galactic history, countless civilizations across the cosmos looked on as their finest warriors and champions fell to Eos and his cohorts. When The Harvesters conquered the planet of Tykaan, Eos and other units like him were left behind to prevent uprisings among the enslaved Tykaan people. Eos monitored the slaves from above, quickly stamping out any signs of unrest or revolt, and making all of Tykaan fear the skies.

The Harvesters' undoing would eventually come from within, however. A long time prisoner of The Harvesters named Bloat and his two companions led a swift and violent revolution against their masters. Once they had slaughtered The Harvesters' main force, Bloat and his companions turned their eyes to the worlds The Harvesters have conquered -- their aim being not to free the slaves, but to seize them for their own. It was only a matter of time before the planet of Tykaan was next.

By the time Bloat and his armies had reached Tykaan, many of Eos' counterparts had fallen into disrepair. They were barely able to control the slaves on the ground, much less defend against a well-trained army. Nevertheless, Eos, along with the few units that remained, stood their ground against Bloat and his forces, but they were quickly put down. All were destroyed in the battle against Bloat, save for Eos, who was buried under a rockslide. There re remained, entombed and in stasis lock.

Millions of years later, Skrime, in pursuit of a bounty, stumbled upon a strange metal tentacle sticking out of a cave wall. Always on the lookout for new tech, Skrime dug out the deactivated Eos and took him back to his junkyard. Skrime repaired Eos, planning to lease out the impressive killing machine to his customers. But when Eos was finally reactivated, the robot immediately reverted to its original programming. Leaving a disgruntled Skrime behind, Eos quickly departed the junkyard moon, laser focused on finding the one that had brought his masters to ruin so many ages ago -- the creature known as Bloat.

Shoots a bullet towards target direction that materializes at the start of the targetting line and continues flying with greatly increased speed. The bullet explodes at the first ground unit hit or at maximum range dealing damage to all ground enemies in an area and slowing them for a short duration.

Deals damage to all enemy units in a cone.

Continuously shoots a beam of energy towards the mouse cursor for a short duration, periodically dealing damage to all enemies in a line. Hitting a target with the beam increases damage dealt of consecutive hits. Also reduces movement speed for a short duration for all targets damaged by the beam's creation. Interrupted by attack and move commands. 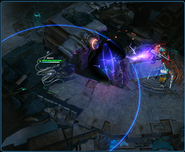 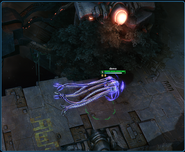 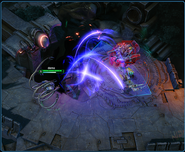 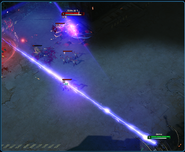