Few know the meaning of suffering better or more completely than Bloat. Ancient and wrathful, not many know his true origins and, indeed, they would be impossible to completely trace. The creation of a cruel, bygone race known as The Harvesters, Bloat is not a single life form, but a mongrel patchwork of several different life forms, cobbled together from the vanquished foes of The Harvesters and kept alive with cybernetic enhancements as a cyborg slave-soldier.

Eons ago, before humans had even begun to stand upright, The Harvesters were conquering vast portions of the galaxy with their host of robots and mindless, malformed cyborgs like Bloat. They spread from system to system, subjugating all to their whims. At their height, they controlled the majority of the Scutum-Centaurus Arm.

In their hubris, The Harvesters never suspected that three of their creations, including Bloat, had retained their intelligence. They were listening to The Harvesters, learning their language, their habits, their weaknesses, their fears. Soon enough, Bloat and his cohorts knew more about those who tormented them than they knew about themselves. Bloat and the others knew they would one day use all that knowledge against their masters. They would make The Harvesters suffer. Bloat and his two allies devised ways to manipulate the other, mindless cyborgs into joining their cause. With each new system The Harvesters conquered, they created more cyborg slaves which Bloat and his allies would promptly recruit. The Harvesters were unknowingly adding to the rebellion that would ultimately be their undoing.

When the time was right, Bloat and two companions rose up and obliterated The Harvester leaders in one swift stroke. The ensuing rebellion, though short, was devastating and the remnants of The Harvesters were soon wiped out. The alliance between Bloat and his cohorts ended there, however, as each of their tortured minds turned to lunacy and delusions of grandeur. They began to think of themselves as Gods...and gods don’t share power.

The three soon turned on each other, vying for rule over the other two. A three way war began, this time lasting ages and costing billions of lives. One of the three cyborgs eventually emerged victorious. Bloat, still believing himself to be a God, retreated into exile, where he all but vanished.

Bloat was eventually found eons later on the edge of our galaxy by a human exploratory vessel. Believing him to be dead, the humans took him on board for study. Their medical instruments inadvertently woke him up. Bloat quickly slaughtered the crew and took control of the ship, setting out to once again anoint himself as God over not just our galaxy but all galaxies. 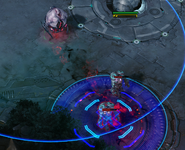 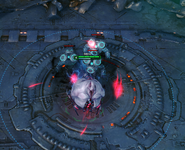 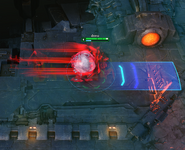 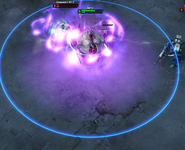 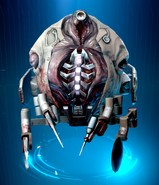