Veck had worked with the same co-pilot since the day he graduated the academy. Together, they had waded into countless warzones, battled against impossible odds, and even taken a few missions on the fringe worlds together. Through it all, they had kept each other alive... until now. Now, the Confederation was planning to replace Veck's co-pilot with some cold-eared new recruit named Skala. Veck didn't care that she was the youngest graduate in the history of the academy, or that her Battle Trial scores were the highest seen by any recruit from the past 20 years and she was being hailed as some kind of tactical prodigy. Veck didn't want a new co-pilot.

Skala didn't need a co-pilot. She'd mastered eery single-seat mech on the line. She knew the only reason the academy assigned her to the two-seat Ares 4 mech was because of her age. Now she was getting partnered up with some ten year veteran named Veck who's last co-pilot was killed in battle. It didn't exactly instill her with a great deal of confidence. She knew she was ten time better than any other pilot out there. Skala didn't need a co-pilot.

Not surprising, the two did not get along at first. Though Veck was impressed by Skala's prowess, he had no use for her reckless attitude. On the other hand, Skala had little patience for Veck's overly cautious approach to battle. Together the bickering co-pilots bounced back and forth across the central planets of the Confederation. On assignment after assignment, SKala and Veck's inability to communicate with one another nearly got them both killed on more than one occasion. That was, until Ganymede.

Radical separatists, declaring their independence from the Confederation, had taken the capital of Ganymede, killing thousands in the process. In order to prevent a long civil war, plans were immediately put into place for a surprise attack to retake the Ganymede capital and put an end to the insurrection.

Scala and Veck were part of the first wave to breach the Ganymede atmosphere. When they hit the ground, they and all their allies quickly found themselves surrounded. It was a trap. Someone had informed the radical forces of the coming attack. The fight was brutal. Many of Skala and Veck's comrades were slaughtered in the initial attack. Those who were left were pinned down, desperately calling for a retreat. Both Skala and Veck knew that unless they did something, everyone would be slaughtered. It was, more or less, the first time the two of them agreed on anything. Skala saw an opportunity that, while extremely risky, cold give them the chance to turn the tide. Skala convinced Veck to disobey orders and the two of them worked together to push through and eventually break the enemy line. Their maneuver caused confusion and panic amongst the less experienced radicals, and bought enough time for reinforcement to arrive and win the day.

Skala and Veck, though praised as heroes, had still disobeyed orders. They were brought before a military tribunal, both fully expecting to be discharged or worse, executed. The tribunal indeed found them guilty but, in light of their heroic actions, Skala and Veck were not discharged. Their so-called "punishment" would be to pilot a "new and possibly hazardous" experimental mech design. Skala and Veck continue to serve the central planets in their new mech, which Veck dubbed the "Ares 5".

To this day, Skala heckles him over the unoriginal name. 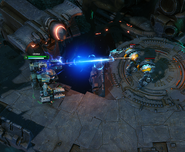 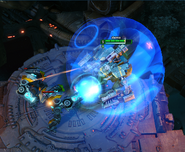 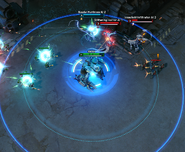 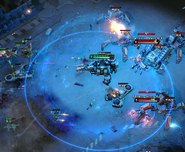 Neutron Disruptor
Add a photo to this gallery

Faceoff
Add a photo to this gallery

Retrieved from "https://supernova.fandom.com/wiki/Ares?oldid=5058"
Community content is available under CC-BY-SA unless otherwise noted.